One of the recurrent malpractices of journalism is ignoring the rights of journalists and failing to credit them or credit other websites or individuals when publishing their materials without requesting permissions to use their articles, photos or filming materials.

Many Arab media establishments are still deliberately play the role of the big bully who disrespects the intelligence of their audiences and play the game of piracy openly without showing any feelings of shame or regrets.

One of such establishments is Al Arabiya Net who has already preached the rights of many journalists and is still doing so by copying their material without their permission and without crediting them. Al Arabiya ignores as well its audience’s complaints about taking advantage of other people’s hard work.

I have personally suffered such malpractice a number of times. Al Arabiya copied my articles in the past without requesting my permission and without offering to pay the fees for such journalistic work such as my article titled ‘Why would Murdoch want to Buy a Stake in Saudi Media?’ which was published on the Palestine Think Tank and AlArabiya Net took liberty of publishing it on Monday, 07 September 2009 without requesting permission from the writer or the website management. I complained then and Mary Rizzo the Editor of Palestine Think Tank complained as well because Al Arabiya did not mention the source, but as usual Al Arabiya behaves like a pirate who takes advantage of the absence of law and order. Not only that but also it has censored my comments when I complained 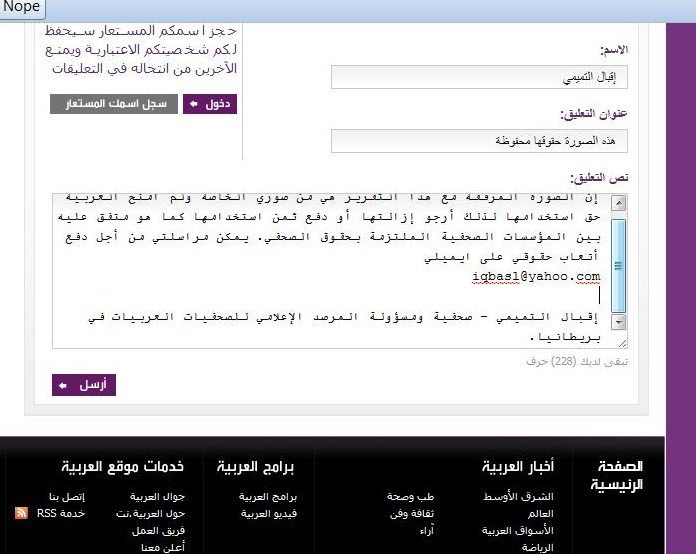 online about its broad day light breach of rights.

The latest of such unethical and unprofessional practices took place on January, 5, 2011 when it has helped itself to one of my photos without requesting permission to use it even though it is marked clearly, that I have the full rights as a photojournalist . Al Arabiya used the photograph with an article it has published in Arabic entitled ‘”Celibacy,” is an exit for the Moroccan young men fearing family responsibilities

As the title explains itself, the article was discussing Moroccans lack of interest in marriage. Al Arabiya claimed that the ‘pirated’ photo is of Moroccans enjoying Sheesha at a Cafe. Al Arabiya has published this false information under the photo and as expected of Al Arabiya it has never credited the photographer as well. The information was false since the people in the photo were not Moroccans nor the photo was taken in Morocco. I took it personally while compiling a report for a newspaper in London and the people in the photo were not Moroccans and I have never mentioned anywhere that they were.

I wrote to Al Arabiya net complaining about their acts of piracy, yet they did not care to apologize, or take the photo off their website or credit me as the photographer nor has Al Arabiya  fixed its wrong information as I suggested.

Al Arabiya Net censored my complaint but it could not sensor the large reflux of complaints it has received from Moroccans exposing its lack of professionalism and what the readers described as ‘lies’ and ‘fabrications’, since open area Sheesha Cafes are banned in Morocco and whoever smokes Sheesha in the open will be fined and imprisoned for three months according to Moroccan law, besides, Moroccans explained in their feedback that they do not smoke Sheesha because it is not part of their traditions. The Arabs residents of London knew the Sheesha Café that appeared in the photo, that even the owners of that Sheesha business in Edgware Road ‘PALM

They all knew well that the information was fabricated and the content of the report had nothing to do with the picture accompanying the report that described Morrocan men as running away from their responsibilities. This was another insult to its audience, since not only Al Arabiya ignores their views and smears some communities with false information but it has also shown no courage to apologize or correct its misleading information or even respect other colleagues’